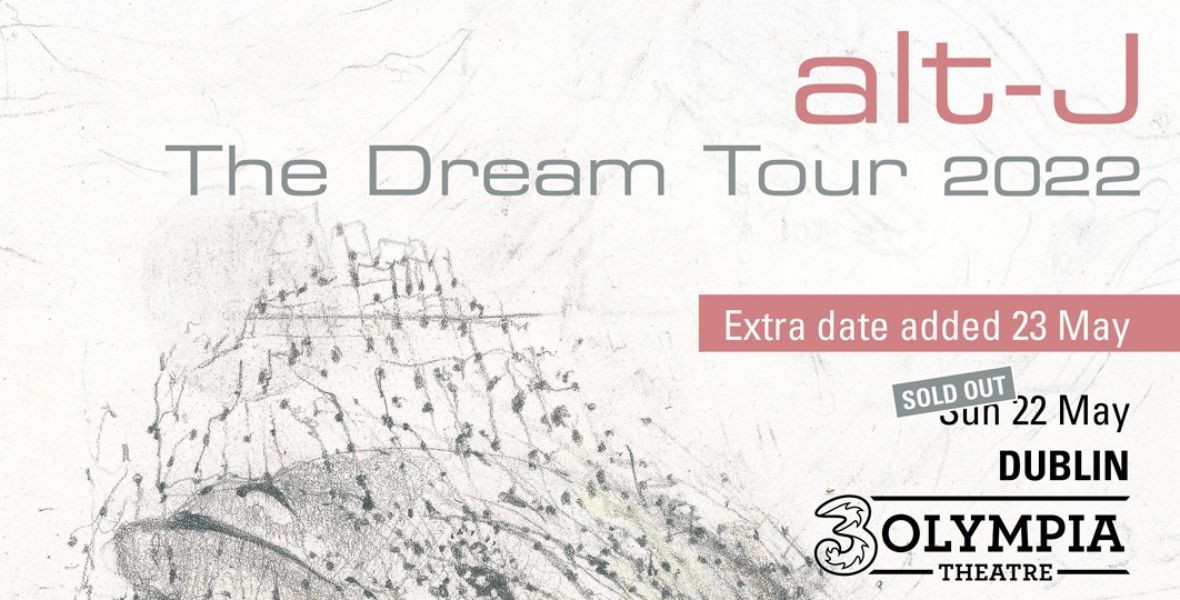 alt-J’s new album is called The Dream – a fitting title for a record of such intrigue, beauty and hidden darkness, recorded throughout the pandemic, but not necessarily a product of it. It’s a record about murder, love, Coca- Cola, twisted logic, revenge, crypto currencies, loss, hope and frequently whatever you yourself decide it’s about.

After winning the Mercury Prize in 2012 with their debut album An Awesome Wave, Joe Newman [vocals, guitar], Gus Unger-Hamilton [vocals, keyboards, bass] and Thom Sonny Green [drums, percussion] made the Grammy-nominated This Is All Yours (2014) and followed it with Relaxer (2017), an album that refused to retread old ground and took the band back to the Mercury’s shortlist the following year. Along the way they plotted giant, globe-trotting tours, sold out Madison Square Garden, the Hollywood Bowl and the O2, amongst many others, and headlined almost any festival you care to mention.

They sampled Miley Cyrus, collaborated with hip-hop alt. heroes Pusha T, Little Simz and Danny Brown on 2018 remix album Reduxer, and made history by co-creating the first immersive sound show of its kind at New York’s Forest Hill Stadium in the summer of 2018, where 360 degree speakers made the performance sound like it was optimised specifically for every single member of the audience, no matter where they stood in the venue.

As the shows eventually wound down, the London-based trio agreed that 2019 would be set aside as a year of reflection and recharge. “I felt like with Relaxer we had reached the end of something,” says Unger-Hamilton today. “I think with this album you can tell that we feel rested and excited to be making music again.”

The Dream, alt-J’s fourth album, began life on schedule, in January 2020, when the band first regrouped at their own studio – a rented house in East London, to work on early ideas. Navigating Covid as it arrived and hung around – with Green shielding throughout the pandemic and often working remotely – The Dream was recorded from August 2020 until June 2021 in this semi-treated space with long-time producer Charlie Andrew. What slowly emerged was a record of intrigue and ambiguity that fizzes with a rejuvenated sense of experimentalism.

“When we first met up after the year off, I was pretty nervous about it,” says Green. “I wasn’t sure what we were going to do and how I was going to feel about it. But I always forget how easy it is. It feels instinctual. For me, personally, I just know what to do. It felt really uplifting.” The rest of the band shared the same “back to school” nerves, “but like Thom says, you forget how easy it is,” says Newman, “and how quickly the writing can unfold.”

No track proves the point more than the first the band worked on. ‘U&ME’ came from a batch of soundcheck jams the band recorded on tour, and felt almost like a pre-written song when the band listened back to its tape in London, even if they couldn’t remember playing it. “It gathered momentum on it’s own, really,” remembers Newman. “It was best to just get out of its way. We were just there.”

A laid back holiday groove, in theme and tone, with deceivingly dense layers of percussion (something of an alt-J calling card), it sounds as effortless as the band say it was to make – a joyous no-brainer of a lead single for their new album.

It’s one of the The Dream’s most direct tracks, alongside the closing ‘Powders’, which recalls the unmistakable rush of young love (“‘Free house’ – the greatest two words to hear at 16”), and the beautifully sad ‘Get Better’, about the slow death of a life partner. With the band stripped down to Newman and a solo acoustic guitar, with the occasional vocal harmony from Unger-Hamilton and plaintive piano chords, if it wasn’t for its unforgettable torchlight melody it’d almost be too much to bear for a second listen. Or as Unger-Hamilton puts it: “When Joe first played it to me I didn’t just get a bit tearful, I broke down. A big, big cry. A cry of the year.”

‘Get Better’ features the album’s only lyric that places The Dream smack bang in the middle of the pandemic – “I’ll start the day with tiramisu, raise a spoon to frontline workers / An underfunded principle, they risk all to be there for us”. The album comes with its fair share of underlying darkness, but the band say that it hasn’t come from Covid-19. “For me, lyrically and thematically, there’s more talk about true crime in this album than the pandemic,” says Newman. “If we’re going to talk about themes and concepts, there are more songs about people being murdered. It’s like fantasy and escaping, and that’s what we’ve always done in our albums – it’s always about falling in love, losing love, and losing loved ones. It’s what I’m drawn to, lyrically.”

Newman’s big inspiration for The Dream has been the true crime podcasts he’s feasted on over the last five years – in particular My Favourite Murder. “It’s an oxymoron, in the civilised point of view that that doesn’t sound right,” he says of the show’s title. “But actually, we’re drawn to these sort of things, and having an open place to talk about them is a positive way of protecting yourself.”

Darkness like this has lived in all of alt-J’s albums to date, sometimes missed by casual listeners due to Newman’s purposeful use of ambiguity. It’s what’s given alt-J songs such staying power over the last 9 years – the game of interpreting, unpicking and reinterpreting what these unusual, cryptic songs are all about. “For me, the best thing about writing is focussing on each sentence as a vignette and then sewing them all together, so they form some sort of coherence but you’re not entirely sure what you’re listening to,” Newman explains. “And the fact that it’s ambiguous leads you to want to listen to it more.

“It’s so boring telling someone how to feel about something; you actually want to offer them something that brings up a strong visual response, and then they can step into that world and try to visualise it themselves. That’s far more interesting.”

On The Dream, this approach to storytelling gives us ‘Happier When You’re Gone’ – a breakup song of relatable escape on one level; on another, the inversion of Jimi Hendrix’s ‘Hey Joe’, where Joe’s “old lady” refuses to remain in this abusive relationship, kills her tormentor and burns the body – and the slowcore steady rush of ‘Losing My Mind’ – an exploration into the logic of a serial killer, containing so much space it can mean something totally different every time you listen to it, without you having to think of murder at all.

Elsewhere, the band are just as confident centring their songs around Coca-Cola (the opening ‘Bane’), the hysterical nature of crypto currencies (the tongue-in-cheek ‘Hard Drive Gold’, which has Newman yelping “Don’t be afraid to make money, boy” – “It’s a little bit like a ‘Left Hand Free’ type of song,” he says), and the cautionary tale of ‘The Actor’, who sells cocaine to support his dreams in Hollywood and either did or didn’t supply John Belushi with his fatal dose at the Chateau Marmont in 1982. Again, ambiguity is alt-J’s super power, present too in the album’s title, inspired somewhere between the dreamlike period the album was recorded in, through a worldwide pandemic, and a Picasso painting of the same name.

Musically, The Dream is as varied as its lyrical themes, all the while remaining distinctively an alt-J album. It’s unavoidable when you put together Green’s whip-crack drums, as void of cymbals as ever, Newman’s serpentine guitar lines and unmistakable vocals, and Unger-Hamilton’s irrepressible synth hooks and newfound proficiency in bass guitar. There are plenty of places for them to hide alt-J Easter eggs for existing fans (keep an ear out for that Yamaha “yeaaaaah” sample), while pushing themselves to explore ’80s new romantic balladry (‘The Actor’), Southern blues (‘Walk a Mile’) and the occasional blast of opera (‘Philadelphia’).

Further experimenting, the vocal samples you’re hearing aren’t samples at all – not clips from crackling TVs and fuzzy radio plays but purpose-recorded parts, performed by the band’s friends and family. Groups and artists are always saying that their new album is their most personal yet, but in this sense, it’s very much the case for alt-J and The Dream. The voice that says “Scum!” in ‘Hard Drive Gold’ is Unger-Hamilton’s mum, delivered via WhatsApp. His wife provides backing on ‘The Actor’. Green’s girlfriend and Newman’s parents also feature, while the voice that begins the album at the top of ‘Bane’ – a track that Green likens to the sonic palate of the album in microcosm, shifting and unfurling as it does with no way of knowing where it’s going next – is the band’s sound tech enjoying a Coke, recorded on tour.

“We had this moment on the third album, where we had this song and we were going down a very route one road, and we didn’t realise until we’d written it that it sounded very alt-j light,” says Newman when talking about the band’s appetite to try new things. “That was one of the scariest moments, because you’re like, ‘fuck, how many songs are we now going to write that we’re not inspired by?’. And we had to work hard at addressing how to avoid those pitfalls. On this album, we didn’t need to think about that at all, and it was exciting that we had this momentum and thirst for writing something new.”

The Dream is the sound of a band experimenting more than they ever have, recharged and reinvigorated after their longest break yet – the twelve tracks make for the fullest sounding alt-J record yet. It was a concerted effort from all involved, with Green saying: “We felt like at this point in our career, after so long off, we needed to come back strong.” With The Dream they have achieved this, and then some: it is a bold album that draws the dots between the band’s trademark sounds, a record that finds alt-J mastering the art of balancing experimentation with moments of pure ecstasy. 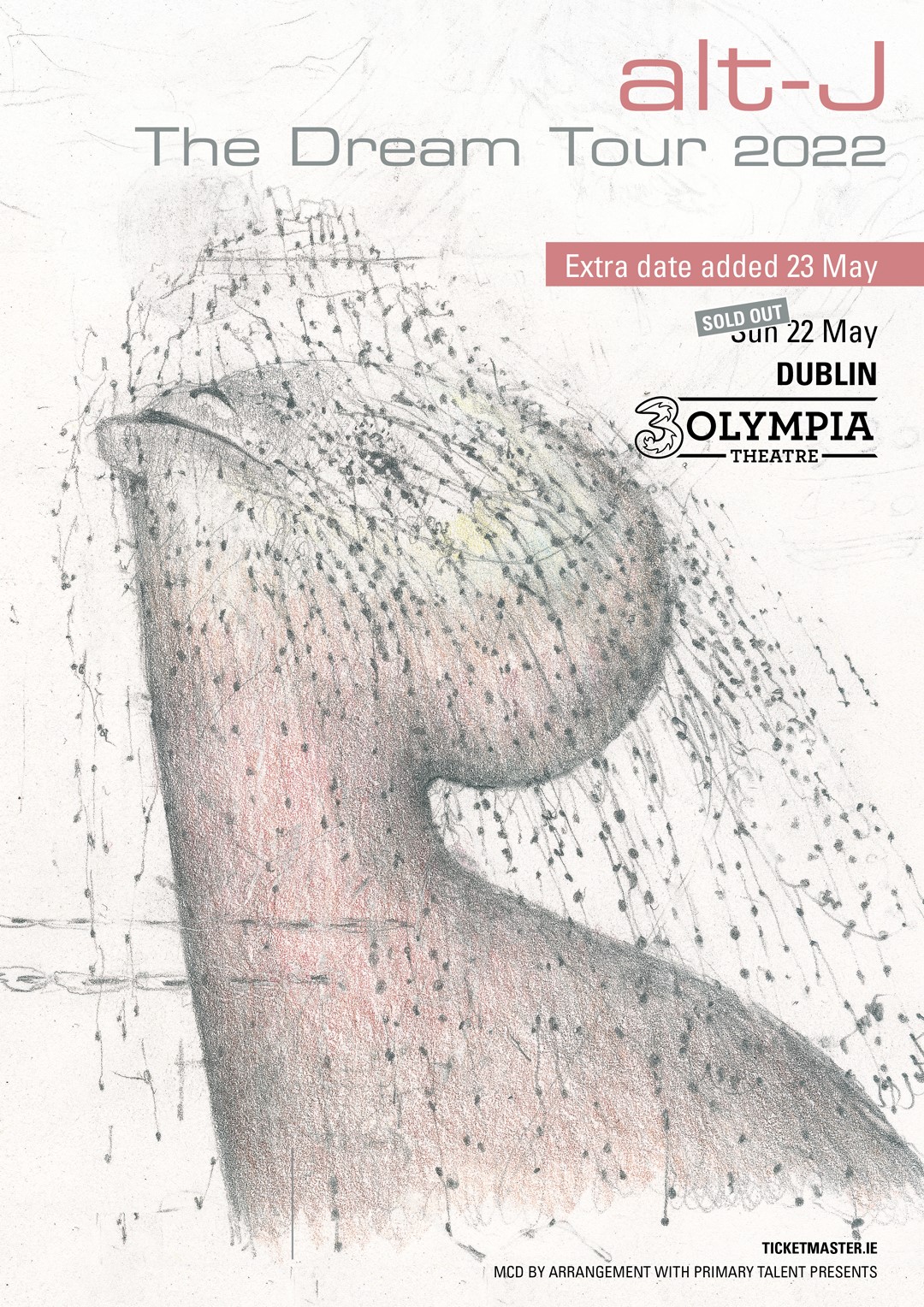