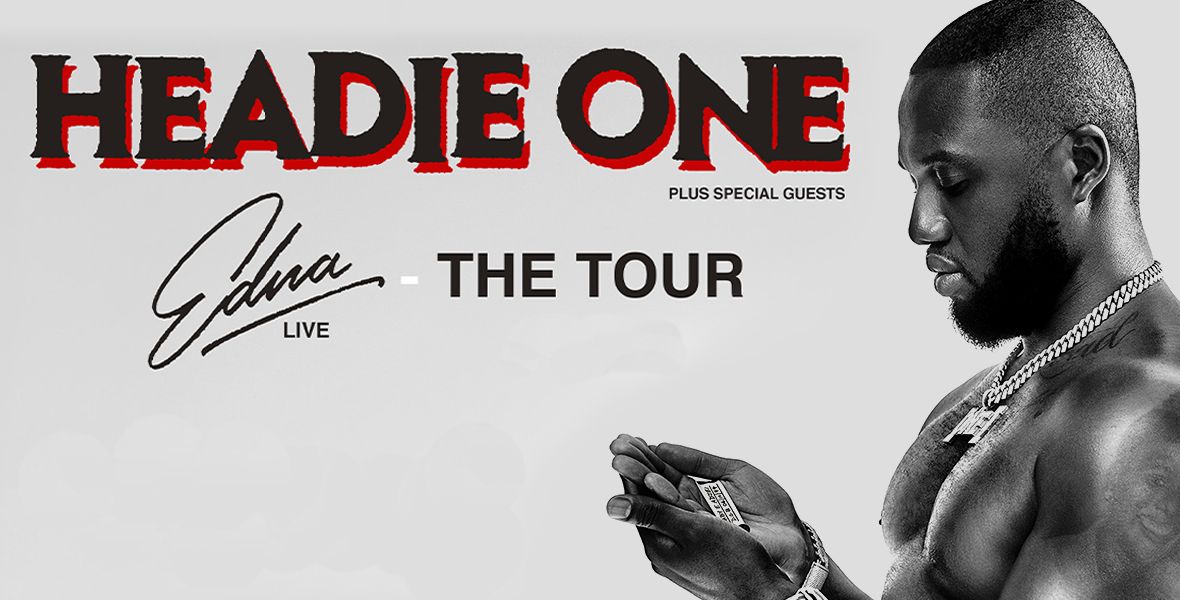 More Info
For more on Headie One
Book Now

Headie One will play a 3Olympia Theatre show on Saturday 13th November 2021. Main support announced as A92.

Tickets for 9th May 2021 are valid for the new date, no exchange necessary.

Tickets priced from €29 including booking fee & €1 restoration levy on sale now via www.ticketmaster.ie

Headie One, the first artist to emerge from the Drill scene with a UK Official Chart top #10 single, rise has been fast but not without validation every step of the way. The 25 year-old rapper born and raised on the streets of Tottenham, one of the figureheads of the burgeoning scene, drew inspiration from the smooth melodics of southern and east coast Hip Hop to create his signature bouncy flow coupled with his acute wordplay. He surrounded himself with others who also needed an outlet to express their take on life and truly fell in love with music. In a way Headie’s rise seemed fated, as though he was destined to be one of the genre’s forefathers – like Wiley with grime, fellow Londoner Giggs with road rap, or So Solid Crew with UK garage – and has done so with a versatility that means, though he is centred in the drill scene, Headie also easily manoeuvres between the other aforementioned, UK based genres and his aspirations are to showcase his art to the widest demographic possible.

By the end of 2011 after dropping solid verses in songs such as ‘Youngers From Farm’ and ‘Bang For My Set’ as well as some freestyles with fellow Tottenham affiliates, there was a real buzz on the streets around this young rapper. That led him to release his first mixtape ‘Headz Or Tails’ with lead single ‘On Sight’ becoming a street anthem.

During this period he grew even more as an artist by studying different types of music which resulted in him developing the unique flow and instinctive ad-libbing that we know today. He went on to collaborate with fellow OFB member RV on three mixtapes; ‘Sticks & Stones’ ‘Drillers & Trappers’ and more recently, ‘Drillers & Trappers II’. These bodies of work really pushed Headie One to the forefront of the Drill rap scene in the UK. It is not surprising that fans eagerly awaited the release of his solo mixtape ‘The One’. Loaded with high calibre features from the likes of Section Boyz, RV, M Huncho and Loski, this was his best body of work to date, with the lead single ‘Golden Boot’ still remaining a drill anthem.

Approximate stage times as follows: doors open 6.30pm, main support act A92 due on around 8pm, with Headie One due on 9pm.

In June 2018, Headie continued his mixtape series by releasing ‘The One Two’ to critical acclaim. Yxng Bane featured on ‘This Week’ proving Headie One’s keenness to support fellow artists, showcased perfectly at his first sold out London headline show at Village Underground. Shortly after in September, Headie was crowned winner of the ‘Breakthrough Of The Year’ award at the GRM Daily’s Rated Awards.

Continuing the huge success of 2018, Headie started 2019 on an even bigger high, making UK chart history by becoming the first drill rapper to enter the Top 10, reaching number 6, with his track ‘18 Hunna’ featuring Dave.

Returning to music with a bang in May he released the track ‘All Day’ and was duly nominated for Best New International Act at the 2019 BET AWARDS. Headie performed at his first Glastonbury last June, further cementing his status as Britain’s #1 rapper with his track ‘Back To Basics’, featuring none other than grime superstar Skepta.

On 23rd August 2019, Headie released ‘Music X Road’. His sixth mixtape in five years (including three solo tapes). Headie’s musical output and worth ethic is prolific and paid off, with ‘Music X Road’ becoming a Top 5.

‘Music X Road’ demonstrated the respect and high esteem he holds amongst his peers with an impressive list of collaborators. His long-time friend and collaborator RV features on ‘Let’s Go’ with Krept & Konan. Along with Stefflon Don and Nav both featuring on ‘Swerve’.

‘Both’ reached the Top 15 and became his first Radio 1, Capital and Kiss playlisted track, and features the sample of 90’s banger Free by Ultra Nate over a brooding rap from Headie, providing his most epic track to date.

2020 is proving to be an even bigger year for Headie One. In April this year, he released ‘GANG’, an experimental collaborative mixtape with the producer Fred again…The project featured an eclectic list of collaborators including FKA twigs, Jamie xx, Sampha, Octavian and Berwyn, and Slowthai whose sampled voice features on ‘Tyron’.

Displaying a diverse set of musical sensibilities and sounds, ‘GANG’ was immediately critically acclaimed, receiving praise from a host of tastemaker publications like CRACK, NME, Pitchfork, Dazed, Loud & Quiet and more. One of the standout tracks ‘Charades’ has since accumulated over 5 million streams.