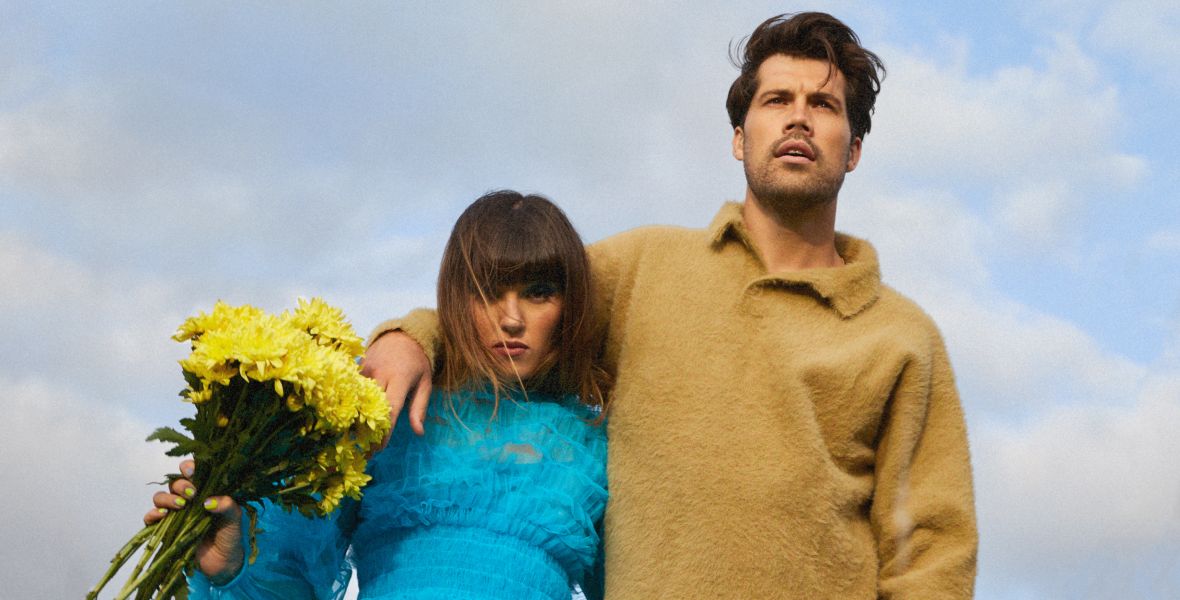 Tickets for their original date are valid, no exchange necessary.

By their own design, Oh Wonder have always flown a little below the radar. A quick peek at their stats (2.7 million global streams), at their back-to-back top 10 albums (1.7 million adjusted album sales), and their list of collaborators (Lil Uzi Vert, Nicki Minaj) and you’d think they’d be household names; but having built their name in the heyday of music blogging and link sharing, you have to really pay attention to see just how big they really are. Take Billie Eilish’s recent Apple Music documentary for example - the biggest artist in the world right now played one cover song during that two-hour film: ‘All We Do’ by Oh Wonder.

Josephine Vander Gucht and Anthony West have played music together since 2014 and been romantically involved since 2013. They kept their relationship under wraps for many years, preferring to keep their private life private. But they confirmed their engagement around the time of their last album, 2020’s glistening No One Else Can Wear Your Crown. Life was good: they’d bought and renovated their dream house, got a dog and were preparing to head out on a 120-date world tour when the first news reports about this very contagious new ‘coronavirus’ began trickling out. And then, as the world shut down, everything fell apart.

Having just affirmed their relationship to the world, Josephine and Anthony suddenly found themselves at home, adrift and on the verge of breaking up.

This tumultuous and deeply personal time in their private lives is the subject of Oh Wonder’s fifth studio album, 22 Break. Written almost autonomously in their home studio, the songs that form it are messages about their true feelings, expressed before they were able to find the words to say to one another. It’s a brutally honest and powerfully beautiful album, and one that lets listeners into the Oh Wonder fold like never before. As Josephine puts it: “We were just writing songs. We had no idea we were writing a break-up album.”

But first, some context:

“We had this 120 date tour lined up and I think we’d played five dates,” Anthony recalls. Their final pre-lockdown show happened in Paris: “There was this elevated sense of, like, we need to party for this one because it could be the last one,” Josephine adds. “We were buzzing! We played this amazing show, it all felt really normal... and then we were in this car park and people were queuing to panic buy toilet roll. And I was like... what is this?”

Having geared themselves up for a long stint on the road Oh Wonder suddenly found themselves back in South London, dazed as they said goodbye to their crew. “In hindsight,” Josephine says, “It took us a couple of months to kind of come down from that.”

“It’s like we had all this adrenaline lined up,” Anthony says. “We had built this show and we were so emotionally invested in the tour.” The sense of the unknown didn’t help. Every few weeks they’d reassess the government’s advice on the situation and think, okay, hang tight: everything will be back to normal in May... in June... over the summer... Josephine remembers how frustrating it was: “We were being told to just preserve this energy and you’ll be able to let it out at some point. And that was probably the most difficult for us to navigate: we have this big ball of energy, when can we throw it out there? And obviously, we never got the chance to, which is how this album came about.”

Oh Wonder are not a band who generally rest on their laurels. Their albums have generally been written on tour, in moments snatched between sound checks and show time, on the road over the grumble of the bus hurtling down foreign motorways. “Actually just having headspace and physical space to kind of focus on that - we've not had that since before we started about seven years ago.” To suddenly stop and find themselves at home, with nothing to do and nowhere to be was completely disorientating. They found themselves questioning who they were: as a band, as a couple and as two individual people.

They began to feel that their career as a band was over. “I made a weird peace with the fact that I might never play a gig again,” Josephine says now. “Maybe this is it. It all just added up to being in a really bad headspace. We started being like, what's the point in any of it?” The questions didn’t get any less heavy as lockdown wore on. “Then we were like, do we actually love each other or are we just pulled together by music?” Anthony remembers thinking, “If we’re not in a band, what do we have left? Who are we? What do we give each other? How strong is our bond without all that exterior stuff?”

As it became obvious that the tour would not be resuming and the world was in a state of suspended animation for longer than anyone had anticipated, Oh Wonder gradually found ways to fill their days. Anthony decided, punchily, to open a coffee shop in Peckham (the gorgeous, meticulously designed Nola) which kept him busy and invited a sense of community back into his life. But though Josephine helped out, she began to feel alienated and alone, with a sense of, am I not enough’ that she couldn’t shake.

So when they did begin writing music again, it came from two very different people. The studio at the bottom of their garden became a kind of portal into their emotional states: in the house they’d act as though everything was normal, that they weren’t navigating a huge, life-altering time that was affecting how they related to each other; but as soon as they stepped into the studio all these unspoken emotions came tumbling out. “The terrifying thing is that me and Anthony hadn’t really spoken - we’d been in work mode for so long. We only started to really process things when we got into the studio. So we’d go in and all these venomous lyrics would just... come out. And we wouldn’t talk about it; we’d just nod and finish the song. It was really odd. It's like it didn't need any talking around it: the song just said everything you were feeling. We ended up writing a spectrum of our feelings.”

Things get pretty bad on 22 Break: screaming fights on Don’t Let The Neighbourhood Hear, admissions of intense loneliness, deepset fears for the future and a real sense of an ending to something comes across. The production is icy, sparse and filled with bloops and bleeps like a message from the ether is trying to come through - which, in a way, it was. Take the album opener, Baby. Josephine came into the studio with it and sang the song once as a demo. “Those lyrics are really personal and intense, and the first time I ever heard them was just recording them,” Anthony says. When they came to record it properly, they realised the power of the song lay in her raw vocal. “There’s so much sadness in it, we didn’t want to try to recreate that again later.” It’s raw and painful and beautiful to hear.

22 Break, the song which gives the album its name, comes from the idea that it takes two people to both make and break a relationship. “I’ma give up, wave a white flag, say I fucked up, that was my bad,” they sing in harmony after verses that speak of “words like spider bites”, building the song into a glorious cacophony of flutes, saxophone and their voices echoing in and out, rarely finding some resolve in the chaos.

“We really got to a point in those songs where it was like, ‘fuck this’.” All the time these anguished songs were pouring out of them, Oh Wonder really discussing what was happening in the studio: never talking directly about the issues that were very clearly coming to light. To both, it felt as though the relationship was ending, that there would be no salvaging it. ‘Free’ seems resigned to the end: Josephine’s whisper-quiet vocals over a warm, plucked guitar that seems to be heading in a different direction from her.

And then, finally, a glimmer of hope. With the album written, the couple went away in September 2020 and finally talked. “We were really close to breaking up,” Josephine says now. “To the point where I was like, I don't think we'll ever release this album. I can't see how we're gonna sit in the studio for three months and finish it.”

Even weirder, the album that almost broke them finally ended up saving them. 22 Break was part of what pulled Oh Wonder together. “There was a sense of, we've got to do this album justice and finish it,” Josephine says now. “‘Okay, we're pretty much broken up. But I can't calmly do anything about it because we're in a pandemic and we're here. So we might as well finish the album. I think it became really cathartic, didn't it?”

“Yeah. It was really dark. But we did. We did a lot of chatting as a result of it, I think.”

“And that's the joyful thing is that it forces you to skim off all the trivial stuff, the surface stuff.”

“The songs put out the questions, and forced us to find the answers afterwards.”

Towards the end of the album is a song called ‘Kicking The Doors Down’. And in it you can hear the changing tide: the moment when Oh Wonder decided to keep fighting. There’s a line of hope that runs through their slaloming vocals, the cadences resolving in a way that the rest of the album never quite manages. There was hope. There was light at the end of the tunnel. They made it.

Not many bands can make a break-up album that culminates in them tying the knot but coming out of the other side of 22 Break and all the soul-searching, heart-hurting that it forced them to undergo, Josephine and Anthony finally got married in August. It was a joyful celebration of their renewed love for one another and they were careful to keep Oh Wonder out of it all.

Just as their relationship now has it’s own space to exist outside of Oh Wonder, so too does their music. “There’s a sense of like, this is music for us. And it kind of doesn't really matter if it doesn't go anywhere,” Josephine almost laughs now. “It doesn’t really matter if anyone likes it or not! Because it’s ours.”