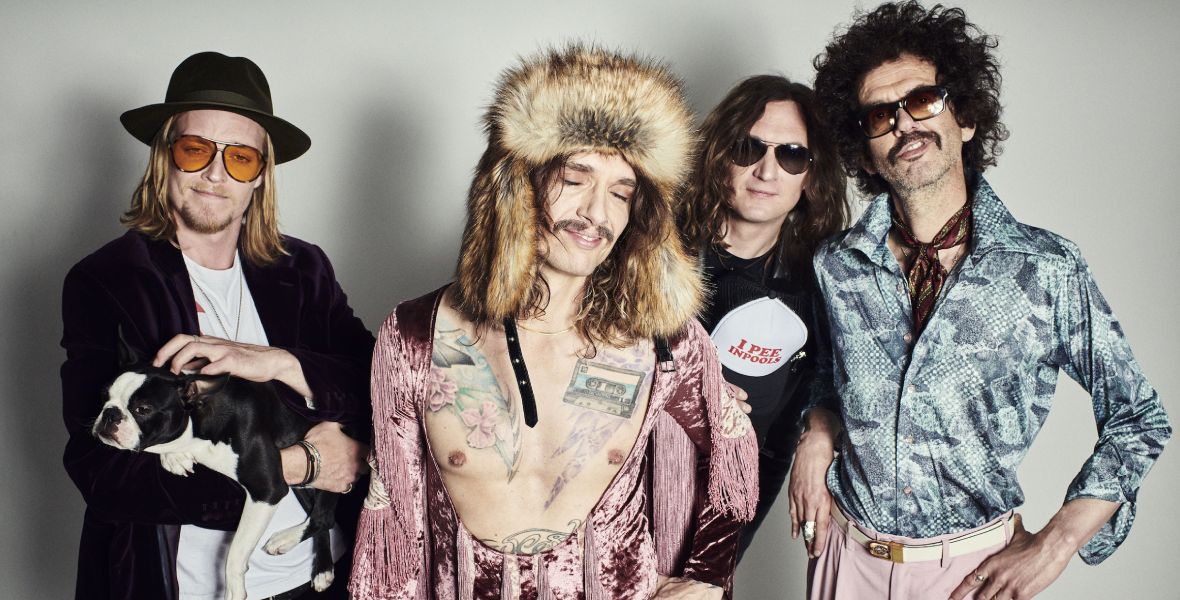 More Info
For more on The Darkness
Book Now

“The time has come, the walrus said… to put your fookin pants on your head and rock like Satan is eating your private parts with a pointy fork! Yes, we, The Darkness, are the fuck back on tour, praise Satan’s better half… come and party with us like it’s the last orders at the last chance saloon.

The Darkness’ new album ‘Motorheart’ was released on 19th November 2021.

The Darkness: Their Struggle
Good men, much like unprompted and ill-timed tumescence, are hard to keep down. The story of The Darkness is the story of a few good men, great men who, against all the odds, secured a rock’n’roll victory and then successfully snatched a temporary defeat from the jaws of that victory only to rise again, like that previously mentioned affliction, and snatch that victory back, again. Yes, there are a lot of snatches in this paragraph, for it is that class of a tale.

The last few rockers stood out like Neanderthals down the supermarket in the early part of this century, still clutching to their leather and denim clad bosoms the seemingly antiquated notion that rock’n’roll should be loud, rawkus even, and have its – or, preferably, someone else’s – tongue stuck firmly in its cheek. Others felt no such want for what they saw as redundant fare, but The Darkness cared little for what the populace may have wanted, they knew what was needed.

After changing their name from Empire – a portent of future conquests – their ferocious live shows engendered a fanatical/borderline-demented fanbase which allowed them to sell out the London Astoria before they had put a pen anywhere near a contract. Speaking of which, one could hardly say there was a bidding war for their John Hancocks, and certain members of the fourth estate looked askance at the band, but if you remember your history books, you’ll know that they gave Jesus a hard time too. Their debut, Permission To Land, when it, eh, landed, took up lengthy residence in the northern reaches of the charts and went on to sell somewhere in the region of 1.5 million copies in the UK alone. That is what is known in the ‘biz’ as quadruple platinum. There are unconfirmed reports that many of those supposedly in the ‘know’ in the same ‘biz’ were walking around under dark clouds, kicking cans up and down empty streets, for a long time.

The album’s shelf life was greatly extended by the release of the greatest single of all time, ‘I Believe In A Thing Called Love’, in September of 2003, which even sold over half a million copies in the U.S. of A. What would any band worth their salt do next? Why, release a classic Christmas single of course, and ensure that the cupboards of future pensions would never be entirely bare.

Approximate stage times as follows: doors open 7pm, support from The Love Buzz around 8pm, with The Darkness due on around 9pm. We expect the show to be over around 10.30pm/11pm

Stool
There were BRIT awards, Kerrang Awards, even Ivor Novellos. There was an ‘underrated’ second album, One Way Ticket To Hell… And Back! and a tour with a flying boob chariot. It was a glorious belle époque in which to be alive but, and it’s a tale as old as time, certain members were enjoying themselves just that little bit too much, and everything came to an ignominious end. Like Icarus of old, they had flown too close to the sun. As celebrated philosopher/headbanger Lao Tzu once memorably put it, the flame that burns twice as bright burns half as long.

Rock historians now refer to the barren period between 2006 and 2011 as the dark ages du rock, or rock’s nuclear winter, forced as believers were to subside on a diet lacking in proper nutrition. Tankards were raised morosely in ale houses across the land as we remembered the good times and mourned what had been lost. Finally, the stone was rolled away, and our saviours emerged from the tomb, announcing reunion shows.

Two albums were gifted unto all as they clawed their way back to their rightful perch, Hot Cakes and the accurately-titled Last Of Our Kind, containing magnificent – that’s right, I said magnificent – cuts like ‘Nothin’s Gonna Stop Us’, ‘With A Woman’, ‘Barbarian’ and the glorious ‘Open Fire’. Drummers came and went until a fresh-faced youth of impossibly appropriate breeding pushed in the stool, and the line-up was complete.

Industrial Language
Look upon them, ye mighty, and despair. Handsome Justin Hawkins, a man who underwent a successful embarrassment-ectomy as a young child, out the front, singing in a range that would make the rotund ladies of the opera weep, and spanking his cosmic plank with insolent ease. The equally handsome ‘Farmer’ Dan Hawkins on the electric rhythm guitar, the man with the right hand of God, and his left one is hardly some shrivelled claw neither. Frankie Poullain on the Thunderbird bass, the world’s greatest living Scotsman now that Connery is teeing off from the golf club in the sky, and quite easily the coolest dude in the universe. And last, and most definitely not least, the almost impossibly handsome Rufus Taylor, beating the drums as if they badmouthed his sister. With the greatest respect to former members who we gratefully thank for their service, this is the definitive Darkness line-up, the Brazil 1970 World Cup Team of rock.

There were further dispatches. Pinewood Smile sported, in ‘Solid Gold’, a single that would surely have left Bing’s pale Noël crooning in the sales dust were it not for the band’s penchant for industrial language. Their “bildungsroman des felsens©” Easter Is Cancelled expounded on a concept involving the aforementioned Jesus kicking arse in another dimension, or something.

Pantaloons
And now there is a new record, MotorHeart. From the sex boogie of ‘You Don’t Have To Be Crazy About Me’ to the going home riffola of ‘Eastbound’, from the E.T. boffing ‘It’s Love Jim’ to the sensitive as a falling boulder ‘Jussy’s Girl’, from the does-exactly-what-it-says-on-the-tin ‘Love Thang’ to the furiously hard – in every sense of the word – sex robot-tapping title cut, it is yet another masterpiece. Drop the needle anywhere to be instantly transported from this moaning and weeping vale of tears to Elysian fields of rock where all hands are raised, the drinks – just as in the Club Tropicana of yore – are free, and everyone wears a pleasingly salacious grin.

And I haven’t even mentioned the already immortal ‘The Power And Glory Of Love’, which shall surely take its place on the inevitable Darkness Greatest Hits, a collection that hasn’t, as yet, been released for fear it would hit like a meteor, sending humanity spinning helplessly into space from our flat earth, like our dinosaurial antecedents.

There’s sufficient “walnut in pantaloon” style innuendo – is ‘So Long’ a mournful farewell or another far-from-idle boast? – to give the ghost of Kenneth Williams a conniption, and do you think Bob Dylan, at his most ‘far-out’, would ever have had the balls to rhyme ‘onyx’ with ‘tectonics’? I think no.

Does it rock? Have you not been paying attention? Is the sun hot? Has your partner’s touch grown cold? Go and stand at the back! The Darkness are the Orwellian boot stamping on the flaccid face of limp rock, forever!

The mighty ‘Ness have never been scared of a cliché, in fact they’ve made a career out of embracing such tropes and motifs, so let me employ one here; MotorHeart is indeed their finest recorded work since Permission To Land, and yes, I did say that about the last one, and I shall most likely say it about the next one too! Would you like to step outside and ‘discuss’ it?

Nothin’s – short of another global toilet flush – Gonna Stop Them. 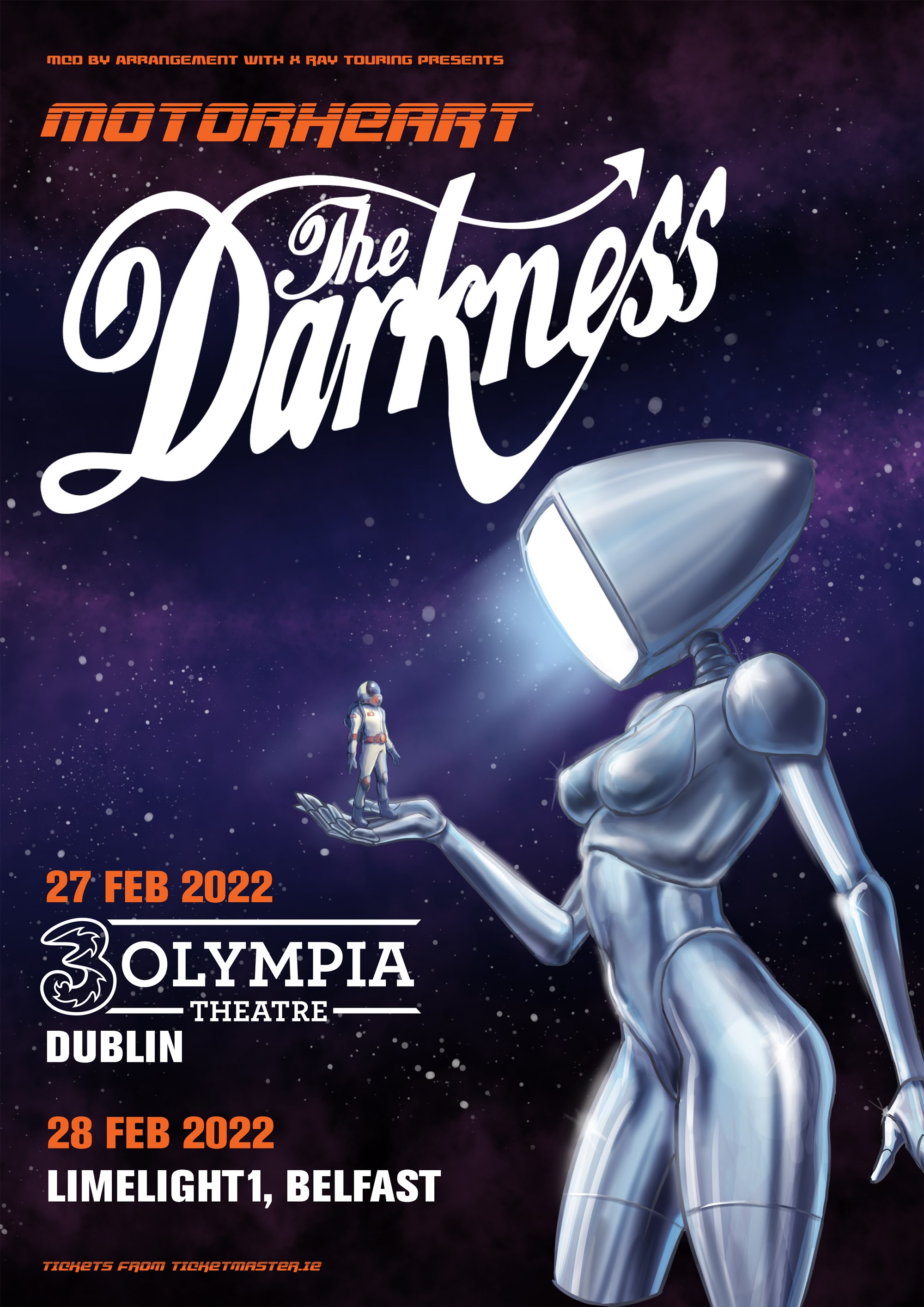