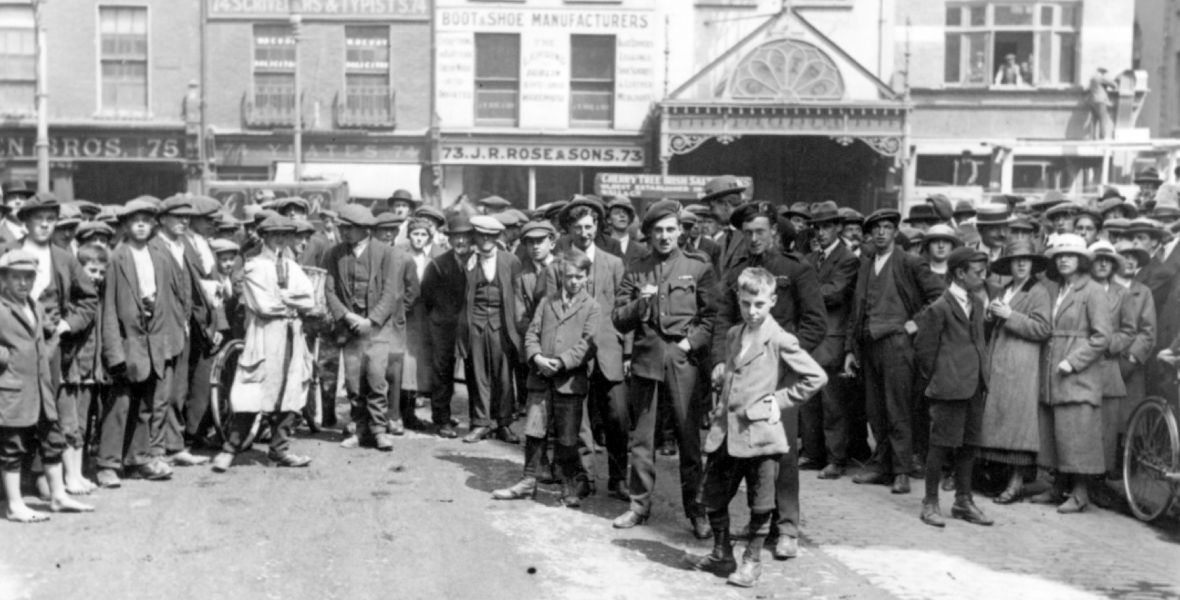 Learn the history of how 3Olympia Theatre came to be, from 1879 to the present.

The building first opened as “Dan Lowrey’s Star of Erin Music Hall”, designed by John J. Callaghan, a well-known architect at the time, for Dan Lowrey. Lowrey had been very successful in the UK, where he ran a number of venues in the burgeoning business of Music Hall Theatre. However, he decided to make it his personal ambition to bring this popular form of entertainment to Dublin. He opened the doors for the first time in 1879, on Monday 22nd December.

Queen Victoria's visit to Dublin 1900 outside The Empire Palace 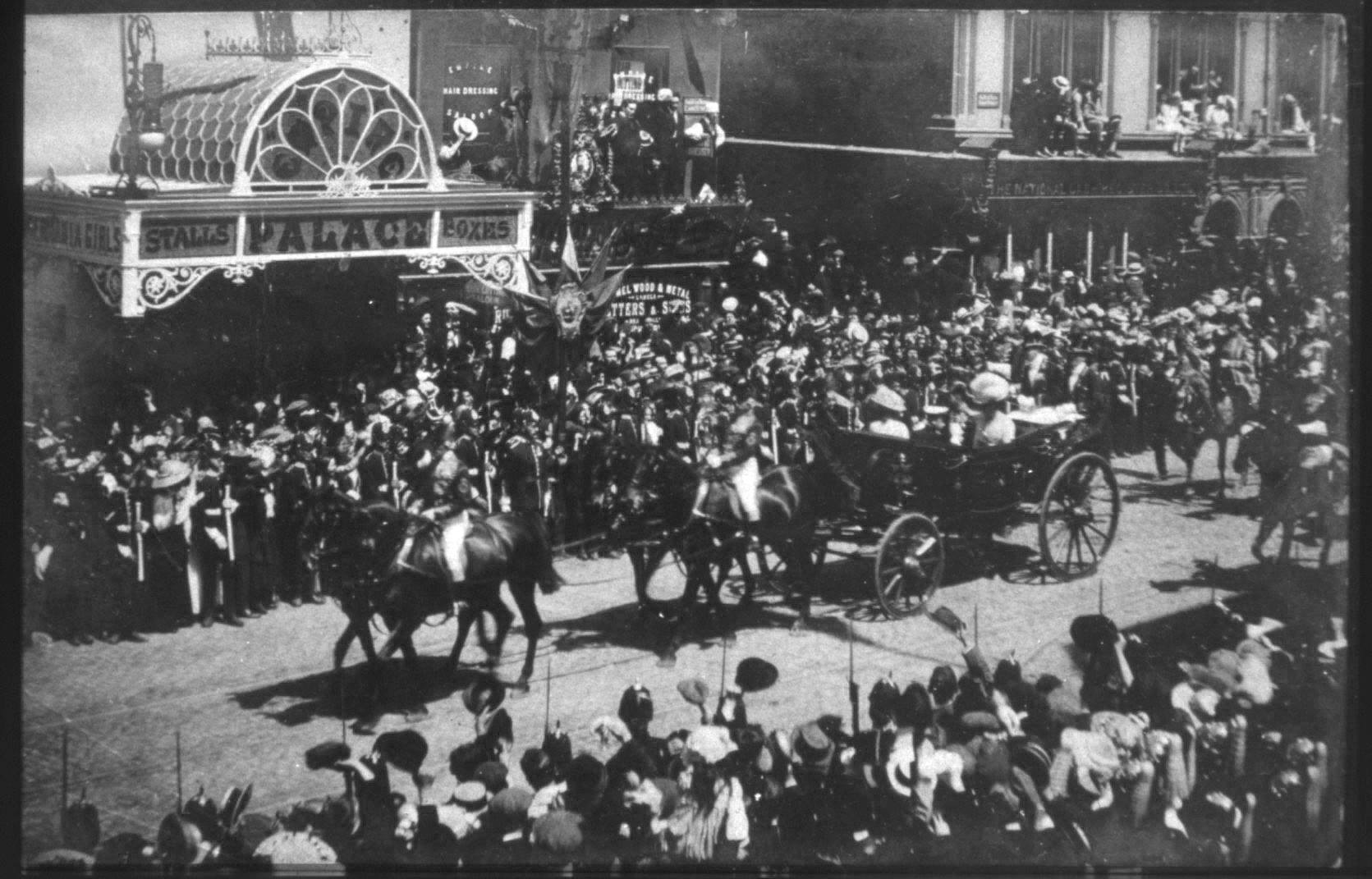 The building however had a more significant make-over in 1897, closing as a Music Hall, and re-opening as a theatre, “The Empire Palace”, with the Lowrey family no longer at the helm, and the nature of the shows being presented began to change. This name survived through the Great War, the Easter Rising, and the dissolution of the large Moss-Stoll theatre empire, as the entertainment industry changed significantly in Ireland and the UK.

These were turbulent times in Ireland. The below photo was taken on 11th July 1921, the day of the Truce of the War Of Independence, and shows crowds gathering outside the theatre, in front of Dublin Castle. This image pictured above is reproduced with the permission of Mercier Archives, Mercier Press, Cork.

In 1923, the venue had yet another re-invention, this time emerging as The Olympia Theatre, presenting drama, opera, ballet, as well as films, oratorio, pantomime, although with a mainstay of revenue and variety. 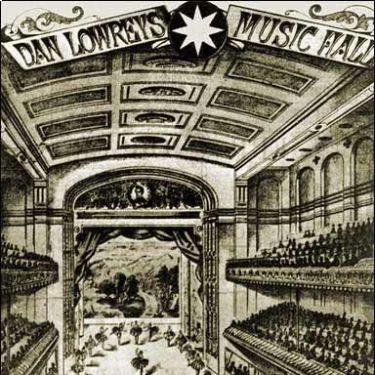 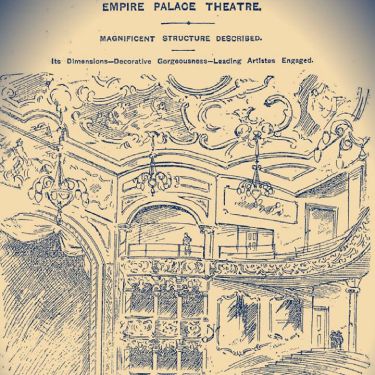 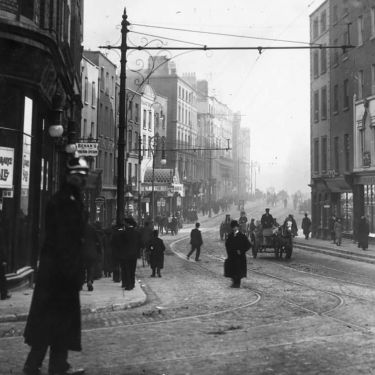 In 1952, a pair of more drama-oriented producers, Stanley Illsely and Leo McCabe, took over and were in management for 12 years, during which time The Olympia was essentially a playhouse.

It was in the early 1960’s that a group of London-Irish businessmen bought the building and the land on which it stood. They sought permission to demolish the building entirely and erect an office block. While their application was being prepared and perused, Brendan Smith, a theatre producer active in Dublin at the time, made contact with these new owners and secured a lease on the building, forming a new company called Olympia Productions Limited, with fellow directors Jack Cruise, Lorcan Bourke, and Richard Hallinan, and with Brendan Smith as Chairman.

This original lease continued and was renewed and extended repeatedly as the landlords continued to pursue planning permission to demolish and re-develop until eventually, the tenant company acquired an ongoing right of renewal, which protected the building as a theatre provided that the tenant company could continue to operate commercially. This frustrated the attempts of the landlord owners to demolish the building. 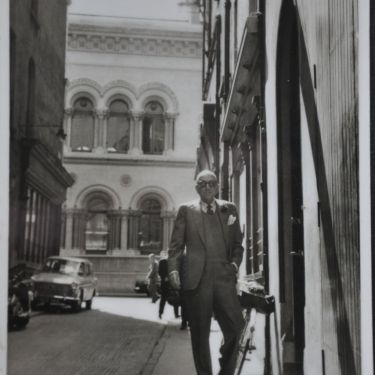 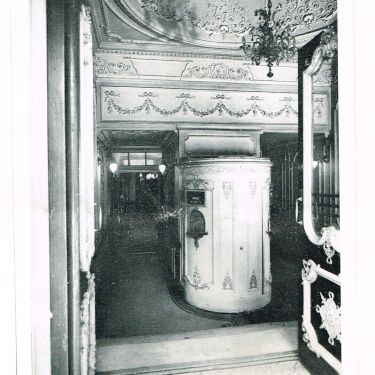 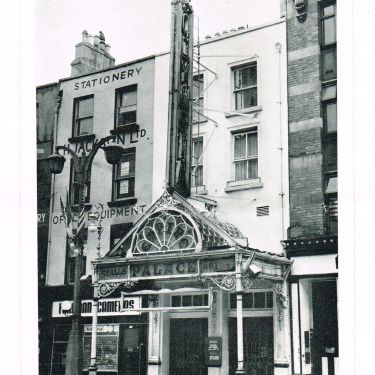 However on 5th November 1974, disaster struck when, during a rehearsal break prior to the opening night of a production of West Side Story, the proscenium arch of the theatre across the width of the stage collapsed and, literally, the roof fell in. Sadly the theatre remained closed for nearly two and a half years. It was due to the generosity of Dublin City Council, Corporation and, indeed, the Dublin people and members of the Irish theatre community, but especially the tenacious efforts of the Board of Olympia Productions and the staff, led by Dr. Brendan Smith, that the theatre was re-opened on 14th March 1977.

Olympia Productions Limited continued to be the operating company, and in the mid-1980’s Gerry Sinnott, Pat Egan and a number of other new directors joined the Board and took over the running of The Olympia. This newly rejuvenated Board enjoyed an 18-year reign until 1995, when it was bought by Denis Desmond & Caroline Downey. 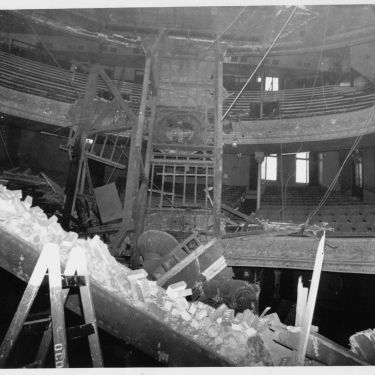 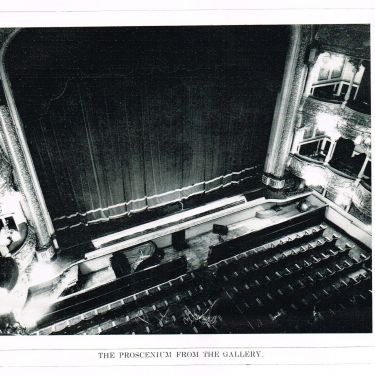 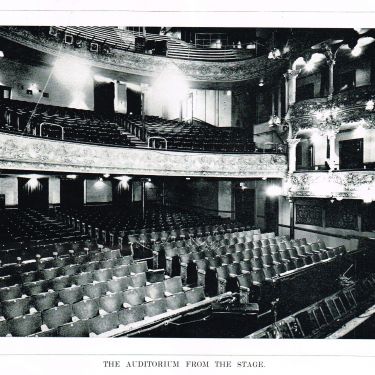 Over its formative years many world-famous names in the theatre and film world have appeared on the stage in the Olympia.  These include Charlie Chaplin, Laurel and Hardy, Harry Lauder, Tyrone Power, Noel Coward, Alec Guinness, John Gielgud, Dame Edith Evans, The Lunts, Jean Vilar and his world famous company Theatre Nationale Populaire, and the incomparable Marcel Marceau. 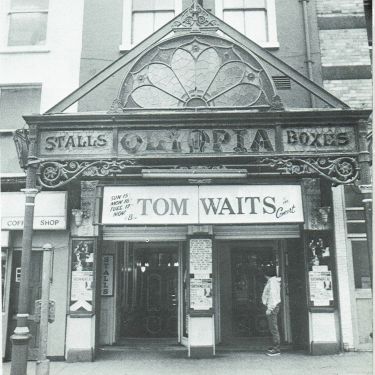 Tom Waits at The Olympia Canopy 1987 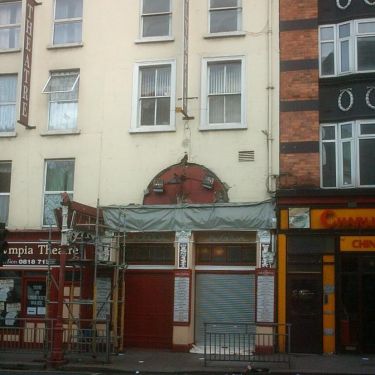 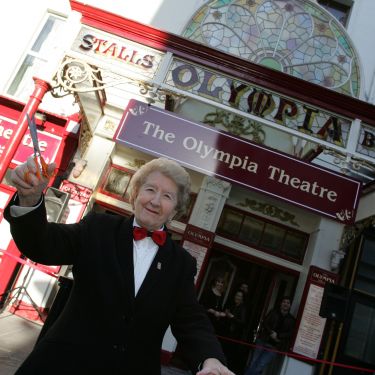 The stellar reputation of the theatre is proved time & time again when world-famous acts request intimate shows here for their Irish fans.

David Bowie at The Olympia Aug 1997 - Photo by Kyran O'Brien 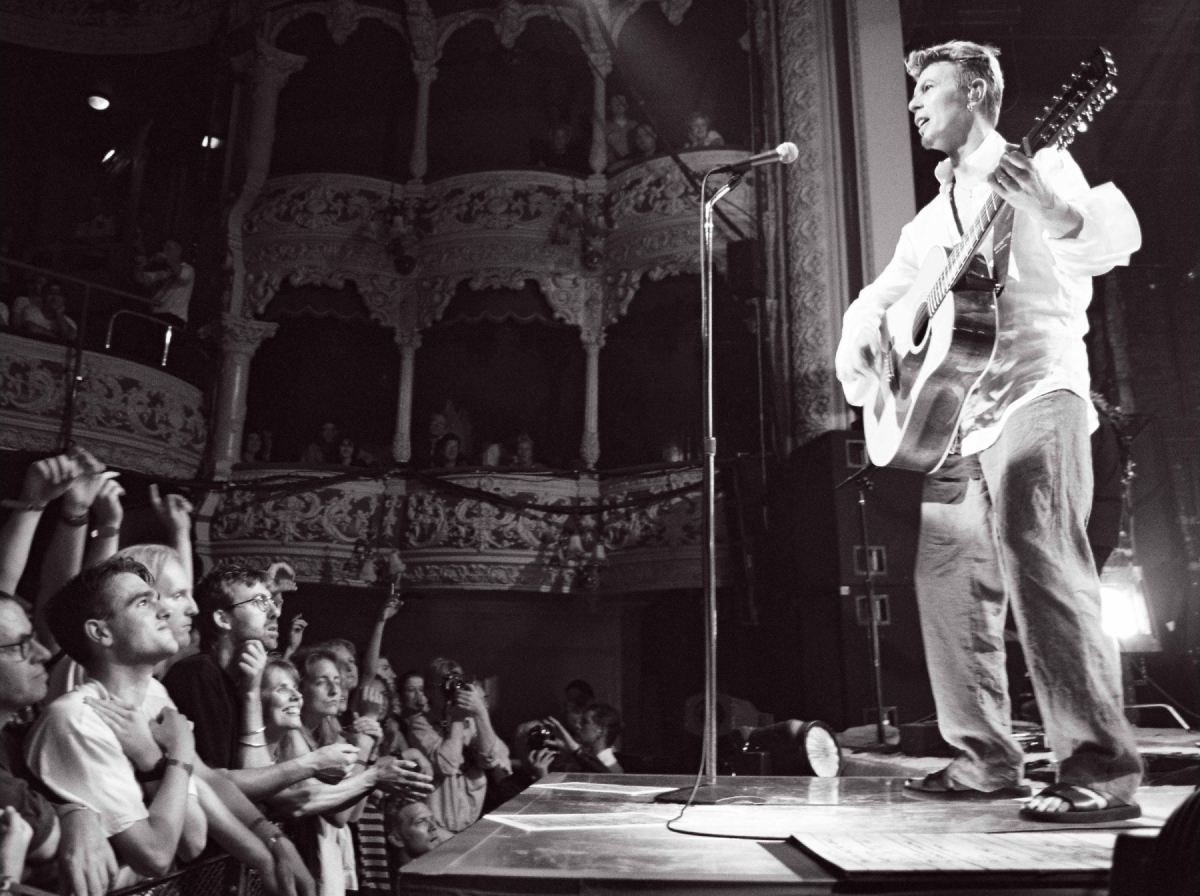 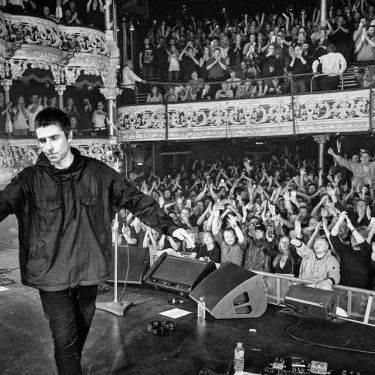 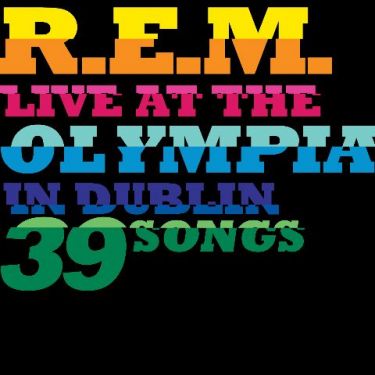 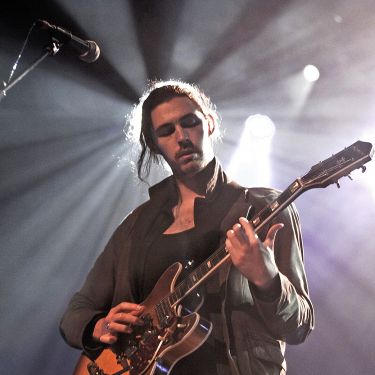 Between 2015 & 2016, the owners Caroline Downey and Denis Desmond to date have invested €4 million into the theatre to bring The Olympia back to her former glory. The theatre has undergone refurbishment in various areas and is looking beautiful. 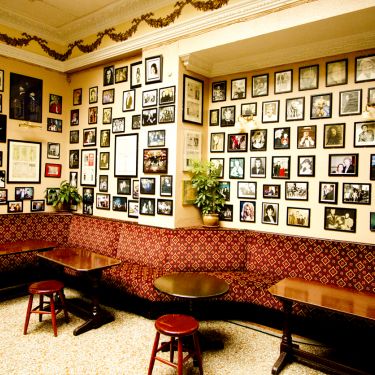 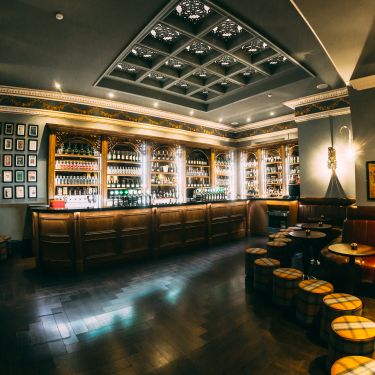 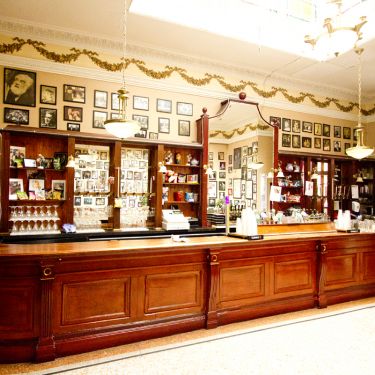 On 15th September 2021, Three Ireland announced an exciting new partnership to become primary sponsor of one of Dublin’s most renowned music, arts and entertainment venues, The Olympia Theatre.

The sponsorship will run over an initial eight-year period and see the venue renamed to ‘3Olympia Theatre’. The investment of this partnership will provide support to the historic venue as it prepares for its reopening, ensuring the overall heritage & rich history of the building is preserved for years to come.

Three is one of the leading sponsors of live music and entertainment in Ireland today, including title sponsor of 3Arena as well some of the country's biggest festivals, Electric Picnic and Longitude and today’s announcement reinforces its commitment to music in Ireland. This new partnership between Three Ireland and The Olympia Theatre will complement its existing sponsorships, providing further support to Ireland’s flourishing music scene.